Recently Xiaomi has launched its much awaited and flagship smartphone, which is Mi5. Mi4 was also a very good android phone and was praised for its features, high-end specifications and lower price. Mi5 is the successor of Mi4 and it really comes with breathtaking features, beautiful & sleek design and top end specifications . Here in this post I will tell you about the new features in Mi5 which were not present in Mi4 and also make a comparison of the two smartphones. 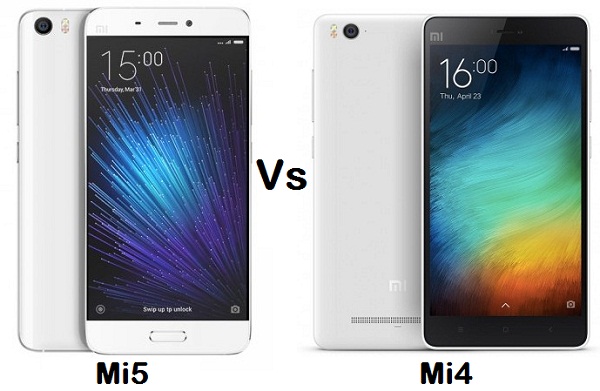 What is New in Mi5 from Xiaomi?

Here the important features that are added in the current Xiaomi Mi5 Android Smartphone from Xiaomi.

Faster Snapdragon 820 Processor – Xiaomi Mi 5 comes with the latest Snapdragon 820 SOC which is currently the fastest mobile processor around. It is a 64-bit processor that can reach speeds up to 2.2 GHz. The GPU in Snapdragon 820 SoC is Adreno 530 which is powerful enough to run any latest HD games with ease. Snapdragon 820 is also very energy efficient and it also comes with loads of features and enhancements including Quick Charge 3.0.

Faster RAM – Mi5 comes with faster LPDDR4 RAM as opposed to LPDDR3 which is found in the older Mi4 smartphone.

Bigger Display – Mi 5 comes with slightly larger display of 5.15 with Full HD Resolution as found in Mi4 also with screen size of 5 inches. The increase in the screen size keeping the resolution same at 1080 x 1920 pixels results in a slightly lower pixel density of 428 ppi as compared to 441 ppi found in Mi 4.

Better Camera – Mi5 has got 16 Megapixel primary camera on the rear and 4 MP camera on the front. The 16 MP primary camera on the backside has Sony IMX298  sensor and the lens of the camera is covered with Sapphire Glass to protect it from scratches. Sapphire Glass is one of the hardest glass known today beating even Gorilla Glass. Other camera features include deep trench isolation (DTI) image enhancement, 4-axis optical image stabilization (OIS) and a flagship image processor. The rear primary comes with dual LED (dual tone) flash for clicking pictures with better color reproduction & reduced noise even in low light conditions. The rear camera of Mi5 can even record videos in 4k resolution.

USB Type-C – This is one of the most important features of Mi5 which is the USB Type-C reversible connector. USB Type-C is the latest USB connector that has a great future ahead.

NFC – Mi5 comes with Near Field Communication (NFC) which was absent in Mi4. NFC is a short range communication protocol that is mainly used for mobile payments.

Fingerprint Sensor – Mi5 also has a fingerprint sensor to add up the security of your device. Using fingerprint scanner you can lock and unlock your whole phone or individual applications using the touch of your finger.

Lightweight – The phone is really lightweight for its size. It weighs at only 129 grams and is around 20 grams lighter than the Mi4.

What is lacking in Mi5?

Here are some features that are lacking in the Mi5 which can be a issue of little disappointment among some users.

No FM Radio – Mi5 does not come with FM Radio which is one of the major setbacks for this phone. FM Radio was present in earlier Mi4 phone. Music lovers will definitely take this in account when purchasing Mi5.

No SD Card Slot – There is no microSD card slot present in this phone which might not be a major issue as the phone comes with good amount of internal storage i.e. 32 / 64GB.

Here are the specifications and neck to neck comparison of Mi5 and Mi4 Android Smartphones.

At last I would like to say that Mi5 really is a worthy upgrade to Mi4 and is easily one of the best smartphone that you can buy today. It comes loaded with almost features in the book (Infrared Blaster, Fingerprint Sensor, NFC etc.) and has got latest and high end specifications. Also it is very affordable considering its whole package and the technology it offers. The 32GB version of Mi5 cost around Rs. 25000/- and you can buy it from the link given below.