Motorola, now owned by Lenovo is known for its cost effective and reliable android smartphones that also delivers high on performance department. Lenovo has just launched its new budget smartphone in the 8k – 9k rupees segment which is Moto E3 Power. Lenovo or Motorola already had a budget phone in this segment which is Moto G4 Play and now they have pushed Moto E3 Power which adds more variety or options in this price range. But this has sparkled a new confusion in the minds of consumers on which Motorola phone to buy between these two as both have similar kind of specifications, looks almost the same size and their prices are also very close to each other. To clear this confusion in the minds of users I am going compare both these Moto phones and list their with their specifications, advantages and disadvantages over each other. 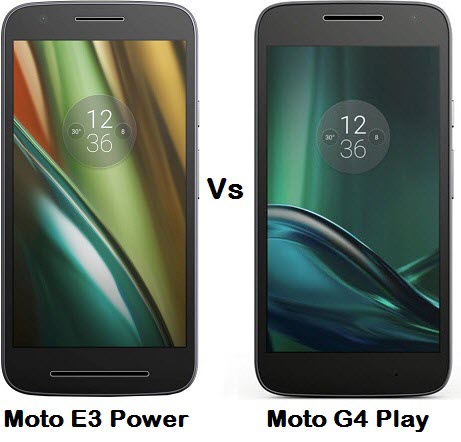 Here are the similarities between Moto E3 Power and Moto G4 Play smartphones from Lenovo.

Must Read: Snapdragon vs Mediatek Processors

Here is the comparison and specifications of both Moto E3 Power and Moto g4 Play Smartphones.

Both Moto E3 Power and Moto G4 Play are excellent value for money budget android phones from Lenovo. The difference in their prices is only of 1000 rupees and each one of them has its own strong point. If you want a reliable budget phone with larger battery backup then you should go for Moto E3 Power but if you want a bit more performance and features then Moto G4 Play is a good choice to buy.