Moto G was a pretty successful android phone and was loved and received well by many people. It is because of the features and quality it offered at an amazing price. It was a very good lower mid-range phone having very good build quality and specifications as compared to the other phones in this price range i.e Rs. 12k to 14k. 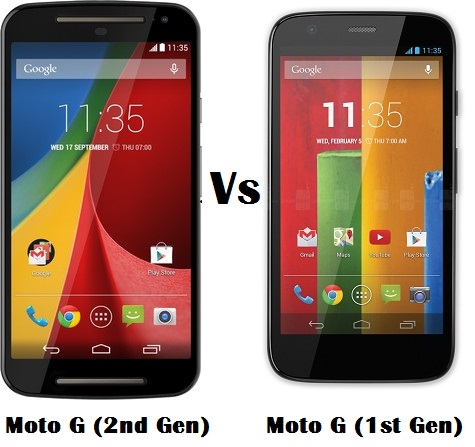 What is New in Moto G (2ndGen.) as compared to older Moto G

Here are the most important things on which both these android mobile phones can be compared on.

The Processor and GPU (Graphics Processing Unit) remains the same in the newer Moto G also, which is Quad-core 1.2 GHz Cortex-A7 CPU and Adreno 305 GPU.

Moto G (2nd Gen.) is slightly bigger in size as compared to the first one. The new Moto G is 11.6 mm taller (height) and 4.8mm wider (width), but at the same time it is 0.6mm thinner or slimmer than the previous version of Moto G. Moto G (2nd Gen.) weighs at 149 grams and is 6 grams heavier than the older Moto G model.

Both of them have 1GB of System RAM and are available in 8/16 GB storage memory options, but in second generation Moto G you can expand your memory to 32 GB, as a microSD card slot is present in it.

Moto G (2nd Gen.) has 8 MP (Mega-pixel) primary camera with LED Flash and 2 MP Front camera while the first generation one has only 5 MP primary camera and 1.3 MP secondary or front facing camera.

Battery in both the Moto G versions remains the same, which is the Non-removable Li-ion 2070 mAh. A removable battery would have been a good option if it was included, but nevertheless.

In the end I would say that that new Moto G (2nd Gen.) has some slight improvements over the older model and the good thing is that the price of the new one has not increased a bit, so in my view Moto G (2nd Gen.) is a very good mid-range phone for the price and you should definitely get one if you are looking for a good android smartphone in mid price segment.