Thermal Paste is a substance that sits between your Processor surface and the CPU Heatsink surface. It is applied so that there are no air gaps left between the CPU surface and the Heatsink because air is a bad conductor of heat and it poses a hindrance in proper heat transfer from processor to the heatsink. So thermal paste is used to allow maximum heat transfer from processor to the heatsink and this helps in efficient working of a CPU Cooler in lowering down the CPU temperature. Thermal paste is also known as Thermal Grease, Heatsink Compound, Heatsink Paste, Thermal Gel, Thermal Compound, Heatsink Grease, Thermal Interface Material (TIM). 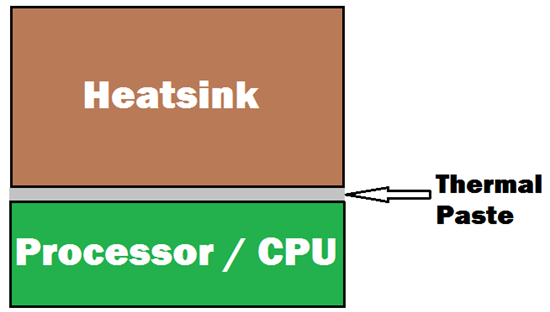 What Thermal Paste is Made of?

Thermal paste is mainly composed of two things, one is polymerizable liquid matrix or paste like adhesive substance and the second one are the fillers.

Polymerizable liquid matrix acts as an adhesive that is used to hold the other materials i.e. fillers so that they can be applied easily on the CPU and heatsink surface. Commonly used matrix materials are epoxies, silicones, urethanes, acrylates or any other proprietary suspension fluid.

Fillers are the thermally conductive materials that are used to transfer the heat generated from the CPU to the Heatsink surface. Materials used as Fillers are metal oxides and metals.

There are mainly two types of thermal paste or heatsink compound available in the market which are being mentioned below.

These are the most commonly available thermal paste that uses metal oxides or ceramic powder as filler. Ceramic based thermal paste is white to light gray in color. Commonly used metal oxides that are used as filler in these thermal pastes are Aluminum Oxide, Zinc Oxide, Boron Nitride, and Aluminum Nitride, Silicon Dioxide. These metal oxides are submerged in Silicone which is rubber like synthetic polymer compound that is electrically and thermally non-conductive in nature. Ceramic based thermal compounds do not conduct electricity which makes them a safer choice to use.

These thermal paste uses metal or liquid metal as filler. Because metal is used these thermal paste offer maximum performance in heat transfer because metal is a very good conductor of heat. The most commonly used metal used in these heatsink compounds is Silver, which has one of the highest thermal conductivity in metals. Metal based thermal paste is grayish in color. These are the top performing heatsink compounds available in the market. They are very expensive and are used generally by the people who overclocks their CPU to a great level or gamers who want their CPU to remain as cool as possible. The best thermal paste available in the market for maximum performance that offers highest heat conductivity is Artic Silver 5.

The only disadvantage of metal thermal paste is that they can conduct electricity, which mean if it comes in contact with your motherboard or any of its components then it may short-circuit the connections and can cause serious damage to it. But there are some metal based thermal compounds available in the market that are electrically non-conductive i.e. they do not conduct electricity, and are safer to use.

Thermal conductivity is the property of a material to conduct or transfer heat. It is measured in W / (m K) or Watts per meter per Kelvin. A substance or material having high value of thermal conductivity will transfer greater amount of heat from one body to another one when its surface area is in contact with these two bodies. Here are thermal conductivities of various materials or fillers used in thermal paste.

From above table you can see that in metals Silver has the highest thermal conductivity at 4 W/mK and it can go as high as 8 W/mk depending upon its purity or quality.

Branded Thermal Paste is difficult to find in common PC hardware stores but you find them easily online on the following reputed online stores by going to the links mentioned below: