Hard disk failure is the worst thing that can happen to anyone. This is because it contains all your important data and if you have not taken backup of it then you will loose it forever. Here I am talking about the mechanical hard drives and not the Solid State Drives (SSD). Hard disks have a specify life period and sometimes they can also fail well before that. There can be various reasons of hard disk failure which I am going to discuss next.

Here are the most common reasons for the failure of an internal mechanical hard disk of your computer.

Overheating – Overheating can cause serious damage and shorter the lifespan of your hard disk. Hard disks can get pretty hot when they perform heavy data transfer operations or being used continuously for all day long. If the temperature of your computer hard disk reaches above 50°C – 55°C then it is a sign of worry and you must take proper measures to keep it down. For PC you can use hard disk coolers and for laptop you can use good laptop cooling pad to keep the hard disk temperature down.

Check out: How to Reduce Hard Disk Temperature

Shock – Shock may cause internal damage to the hard disk components and can result in hard disk failure. So you must be very careful and protect the hard disk from getting any shock. It is very difficult to get shock when the hard disk is inside the PC cabinet but when you remove it from the cabinet then you must handle it very carefully.

End of Life (EOF) – The hard disk must be very old and is in its last stages of life. When the hard disk gets older then its internal components gets weaker over time and at some time they may fail without giving you any notice or warning. So it is better to backup your data and replace the older hard disk before any failure happens.

Heavy Use – Too much constant heavy usage may result in the hard drive failure so it is better to give your hard disk small rests before performing a series of bulky and resource intensive operations.

Manufacturing Defect – It is one of the most reasons for early hard disk failure. Manufacturing defect is the company’s fault and you cannot do anything to prevent it. This is because manufacturing defects cannot be detected in case of hard disks. The only the thing you can do post failure is to replace your faulty hard disk if it is under warranty.

Unknown Reasons – Sometimes due to unknown causes hard disk may fail but this happens very rarely.

There is a third party software called CrystalDiskInfo that can be used to tell your hard disk health. It reads the HDD S.M.A.R.T. (Self-Monitoring, Analysis, and Reporting Technology) data and evaluates the health of your hard disk. It can predict that whether your hard disk is dying or not. 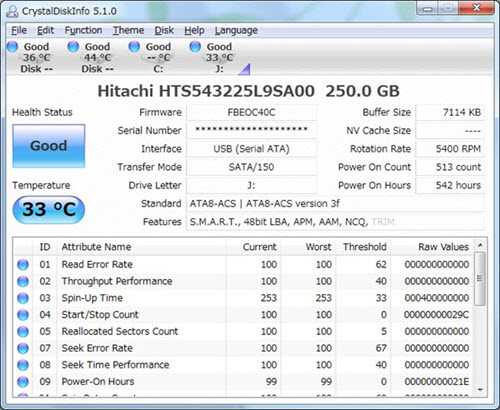 It is small utility and you can download it for free from the link given below.

Here are the most basic reasons that can tell you that your hard disk life is nearly over and it can fail anytime in near future. These basic symptoms will let know that the hard disk in your computer is faulty and needs replacement.

If your computer hard disk is making constant loud noise then this is not a good sign. So if you are getting unusual loud noise from the hard disk then you should be careful and backup your data elsewhere. After that you can get that hard disk inspected for any kind of mechanical fault.

If you are getting very low performance from your hard disk then it is a sign of worry. Slow Read / Write operations is one of the main reasons for a faulty hard disk. You can also benchmark your hard disk using free disk benchmark softwares such as CrystalDiskMark. 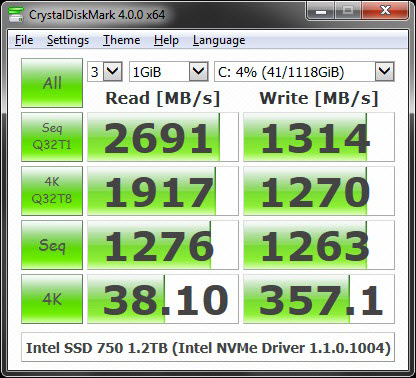 Getting frequent failed Read and Write operations is a clear cut sign that your hard disk is faulty. Here you have to replace your hard disk after backing up your data on to a different hard disk.

If your hard disk has developed bad sectors recently then you should be worried. Bad sectors are just like cancer to a hard disk and they can spread to a greater level corrupting and damaging all your important data present in your hard disk. If the problem of bad sectors is not that serious then you can repair the bad sectors using the Windows Check Disk tool. You can access it by right clicking the required drive letter of your hard disk->Tools->Check now. Here you have to select both the options i.e. Automatically fix file system errors and Scan for and attempt recovery of bad sectors. Now click on start to repair bad sectors. 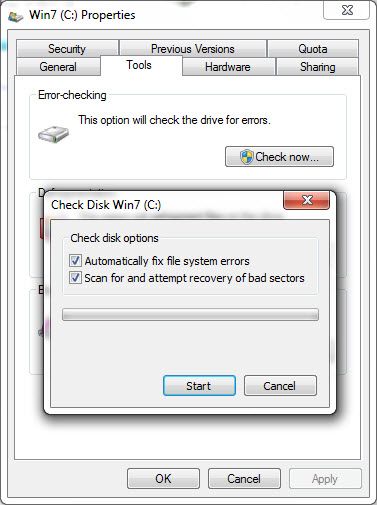 If the bad sectors gets repaired then it is well and good but if it fails to repair them then you may try other third party bad sector repair softwares. If all fails then it is better to replace that faulty hard drive.

Important Advice: When you encounter any of the hard disk failure symptoms mentioned above then the best thing to do is to backup your data to an external hard disk and replace your older hard disk with a newer one or get it repaired if possible.

Well I have explained all the major reasons and symptoms of hard disk failure. If you have any queries or doubts then you can ask me by leaving a comment below.