What is Power Factor?

Power Factor (PF) is the ratio of the real power that is being used for work done to the power supplied to the circuit. It is generally measured in values ranging from 0 to 1. A device with power factor of 1 will be able to use all the power supplied to it. This means all the current supplied to the circuit is being used 100 percent and is converted into real work. If power factor is less than 1 then it means that current and voltage are not in phase. It also means a device with low power factor will draw more current than required and it will cause load on the wires and power distribution system. So it is always desirable to have power factor of 1 or 0.99 for maximum efficiency.

Higher the Power Factor the greater is the efficiency of the device in using available power and lower will be the transmission losses & heat generation. Here are the major advantages and benefits of having a higher power factor for any device.

Important Note: It must be noted that power factor is not at all related to the work efficiency of the PSU. It is only a measure on how well the input current is being utilized by the device and converted into useful work done. For calculating efficiency of a SMPS there is another measure known as 80 Plus certification. Go through the link below for complete information on various 80 Plus certification ratings for a PSU.

What is Active Power Factor Correction (PFC) in SMPS?

Active Power Factor Correction (PFC) is a method or technique to improve the Power Factor of a PSU or SMPS. Today all the good power supplies comes with Active PFC having Power Factor (PF) of 0.99 at 100% Load. 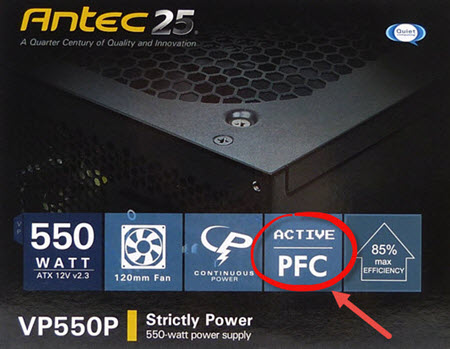 There are mainly two types of UPS based on the output waveform they produce. First one is the Pure Sine Wave UPS and the second one is modified sine wave or square wave or quasi-square wave UPS.

Pure sine wave UPS produces current equivalent to the ones that comes in your homes from the power stations. These UPSs produces clean & safe current having uniform sine wave. This is the recommended current for all the devices. Pure Sine Wave UPSs are expensive because of the cost of circuitry and components involved in producing pure sine wave is much higher.

Modified Sine Wave UPS are the most common UPSs available in the market because they are much cheaper to manufacture. They generate modified sine wave / square wave or quasi-square wave. This type of current is not at all recommended for sensitive equipments & devices and it can damage them if used for a longer periods. It is because modified sine wave contains noise which can be picked up by the devices and they will not operate at its full efficiency or capacity. A modified sine wave UPS can also reduce the lifespan of your components in your PC.

The issue here is that SMPS with Active PFC do not like modified sine wave UPS or inverters. It is said that Active PFC power supplies requires much faster changeover time to switch from mains power to the power supplied by the UPS during battery mode, and due to the design and the cheap circuitry / components used in modified sine wave UPSs this is not possible and it will cause your PC to shut down.

So if you use a modified sine wave UPS with a PSU having active PFC then the following things can happen when the UPS operates or switches to battery mode.

The restarting problem occurs more frequently because of the following two reasons:

When a modified sine wave UPS switches to battery mode Active PFC PSU can cause high initial load on the UPS which triggers the overload protection mechanism in UPS and it shuts down.

Another reason is that when a Active PFC SMPS gets a simulated sine wave then there occurs a power gap between the pure sine wave (power or current getting from mains) and modified wave (when UPC switches to battery) and this power gap causes a momentarily interruption of power to the PSU having Active PFC and it causes your PC to restart or shut down. 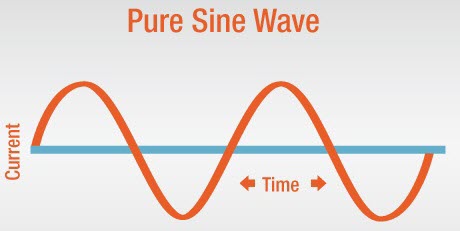 At the end I would like to say that it is always better and advisable to use a pure sine wave UPS for a SMPS having Active PFC. It will prevent you from various problems that I have discussed above and your PC components will be safer. Some Power Supplies with Active PFC can work with modified sine wave UPS but it is not a good practice to use them and they will pose you greater problems in future.