Generally I do not review phones from local brands but this android phone Karbonn Titanium Mach Five has really got my attention because of its high-end specifications and features which it offers at a very low price. It also comes with IR Blaster which is a feature that is gaining too much popularity and now everybody wants in their smartphone. 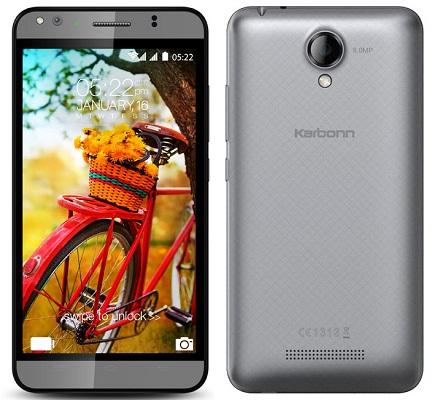 IR Blaster turns your smarphone in a universal remote and you can control virtually every remote operated device with it, which includes TV, DVD players, AC, music systems, projectors, Set Top boxes etc. You can find more about IR Blaster and list of all IR Blaster android smartphones by going through the link below.

But here I am going to tell you why Karbonn Titanium Mach Five is the best budget IR blaster android smartphone.

The first thing that you will instantly notice about Karbonn Titanium Mach Five is its killer looks. The design of the phone is very appealing and it gives an impression of a premium high segment phone when you look at it.

It is a dual SIM (GSM+GSM) phone which means you can use two SIMs of different network providers in a single phone.

It is powered by a 1.3 GHz quad core processor which is powerful enough to run any applications and games with ease.

It comes with 2GB RAM which is generally not found in budget range smartphones.

It has got a large 5-inch (12.7 cm) HD IPS screen having resolution of 1280×720 pixels. The screen is big and bright enough for any kind of work whether it is reading of ebooks or browsing internet.

It comes with a whopping 16 GB internal storage memory which is more than enough for a budget level smartphone. You can also expand this memory to additional 32 GB via micro SD card.

It comes with latest Android v5 Lollipop Operating System which has a great UI and tons of special features and optimizations.

In battery department it is powered by a decent 2200 mAh battery which is enough to keep the phone in operation for more than a day. I wish they have gone for a 2500 mAh or bigger battery but in this price range you have no rights to complain. The manufacturer claims standby time of 250 hours on their official website.

The phone supports 3G, Bluetooth and Wi-Fi which are the general network & connectivity options now.

The other best thing about this phone is its price because even having all the above high-end features you can buy this phone at Rs. 5999/- from the link given below.