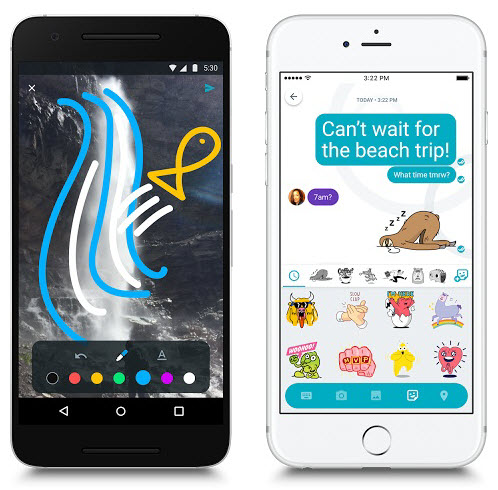 Smart Reply – It is really an innovative feature in Google Allo where you can respond or reply the sender’s message without typing a single word. The Smart Reply feature in Google Allo learns over time and suggests you various replies or suggestion based on the sender’s message and can really save your time. It can also provide you suggestions when the user sends you a picture. So if anybody send you a picture of a puppy then Smart Reply will show suggestions like ‘aww cute’ etc.

Stickers & Emojis – No more boring chat as Google Allo comes with various cool Stickers and emojis to lighten your messaging experience. You can make the chat more fun and interesting by using great looking stickers and emojis. You can also share photos on chat in Google Allo.

Shout / Whisper – This feature will make your text and emojis larger and smaller by simply dragging the send button up or down.

Paint Photos – You can add your creativity on photos you share by drawing something on it. This is really a welcome feature and can have useful applications.

Incognito mode – The incognito mode allows you to send message with end-to-end encryption so that your chat remains private and cannot be compromised.

Sign Up using Phone Number – Google has made the Signup procedure more simpler and easier. Just like WhatsApp you can Signup to Google Allo using your mobile number and you don’t need a Gmail account or email for signing up.

Check marks or Tick marks message status – There are double tick marks or checks for indicating message send, received by the server & viewed by user. This feature you have already seen in WhatsApp.

Besides these two major things there are some little similarities also that include search bar location, goofy backgrounds in chat, similar user profiles, similar type of chat windows etc.

What is Lacking in Google Allo

The biggest things lacking in Google Allo is the absence of Voice Chat and Video Chat. You have to do voice chat using Google Hangouts and make video calls using Google Duo. The users will be definitely annoyed as they have to install and open different apps for text chat, voice chat and video chat. The advantage of WhatsApp here is that they offer voice chat or voice calls. So if Google is really serious and want to make this app successful then they must add at least voice chat in Google Allo.

Here is the neck to neck comparison of WhatsApp and Google Allo instant messaging app.

Google Allo is a new messaging app and it certainly packs some punch with some great innovative features that you won’t find in WhatsApp or any other messaging app. The introduction of artificial intelligence (AI) in form of Google Assistant and Smart Reply makes this app more fun and really stands out from the crowd. This really is a smart messaging app which I liked in the first attempt. But the time will tell how users will see this app and if they are ready to shift from WhatsApp which has really established its root deep in this world.