Problems due to Low Internal Memory in Android Phones

Here are the various symptoms and problems that you can face if your phone has low internal memory.

Frequent Freezing – Your android device may freeze or hang frequently and you will have to restart it to make it work again.

Apps Failure – Some of apps may fail to load or start and you cannot do anything about it other than to free some of internal memory of your android device.

The best solution to low internal memory problem is to move your installed apps to the SD Card or memory card of your smartphone. You can do this by using App2SD Apps which can make this process much faster and simpler. Here in this post I am going to provide the list of best app2sd apps to move your apps installed on the internal memory to the microSD card or memory card of your android phone or tablet.

Must Read: How to Free Internal Memory of Android Phone

Here are the top app2sd apps to move your apps from the internal memory of your smartphone to your SD memory card.

AppMgr III is one of the best App2SD android apps for moving apps from internal memory to your SD card. It is also known as App 2 SD and it supports most of the android smartphones and tablets. Upon installing it scans your android device for all the apps present on your phone memory, SD card and movable to SD card. It also shows you the total and available SD card and Phone memory. The sort functionality lets you to sort apps on the basis of total size, data size, cache size, application size, application name and last update time. 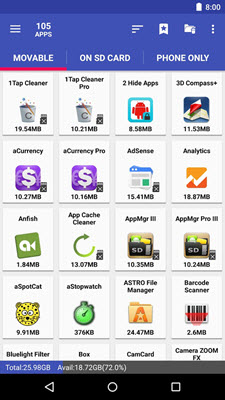 On the Movable tab you can move the apps from phone memory to the SD card and on the SD card tab you can move the apps from SD card to phone’s internal memory. The Phone only tab shows the apps that cannot be moved and will stay only in the internal memory unless you Root your android phone. This app2sd app also lets you clear cache so that you can get more free space on your phone memory or SD card. There is a search feature to search the apps if your apps listing is very long. You can also move all apps at once and hide apps you like. The Freeze apps feature lets you freeze apps so that won’t use your CPU, memory or other resources. From its interface you can also uninstall apps in batch or share apps with your friends. This App2SD app does not require ROOT. Highly Recommended App by me.

Note: This App2SD App may not work on HUAWEI, LG, XIAOMI, ASUS with Android 6+ because the manufacturers in these devices have removed the app2sd function.

This is another very good and feature rich App2SD app but it requires ROOT access to your phone. The other requirement of this app is that it requires 2 partitions on your SD card. You can also use the inbuilt partition tool to create partition on the SD card. 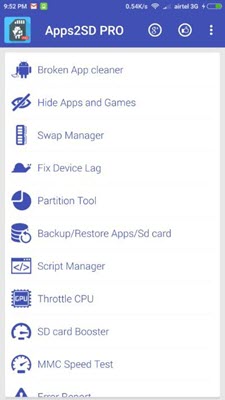 Using App2SD you can move apps to SD card or to phone, freeze apps, uninstall apps, link/unlink apps, hibernate apps, hide apps, backup and restore apps. It also has other nifty features such as brokem app cleaner, partition tool, App manager, Task manager, SD Card Booster, SD Card Speed Test, SDFix and more. The only downside of this App2SD app is that it requires ROOT access which means you have to ROOT your Android Smartphone before using this app. You can buy its pro version which is App2SD Pro to get rid of all the annoying ads.

Link2SD is a very popular application manager that can do many things besides moving apps to SD Card. Just like App2SD it also requires ROOT access and secondary partition on the SD Card of your android phone. 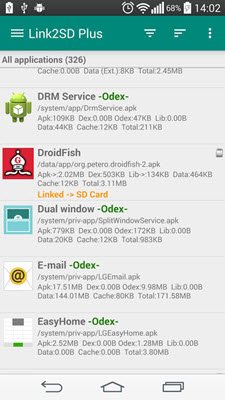 APP2SD Easy is a free and very easy to use App2SD app that does not require Root access or permission. This is a simple app and it can be used to move apps to SD card. It shows various statistics that include the total, used and available memory for the internal storage and SD card and number of apps present on your android phone. 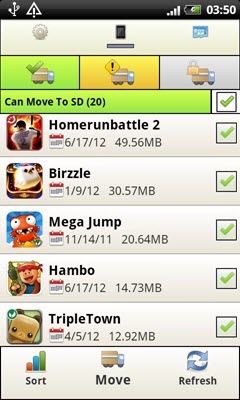 APP2SD Easy can also be used to clean cache, uninstall apps and optimize memory of your phone. So if you want simple and easy to use app2sd app then you can definitely try out this one.

All-In-One Toolbox is a junk cleaner, app2sd app and app & file manager app for android devices. This app includes Junk Cleaner to remove all the useless files and cache on your phone, Speed Booster to speed up your phone, App Manager, File Manager and Notification Manager. 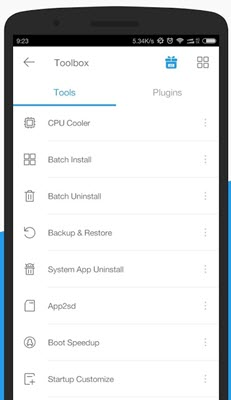 App Manager performs functions that include App2sd to move apps from internal storage to SD card, uninstall apps, backup & restore apps, batch installer and uninstaller, system uninstall and boot speedup. This App also includes a unique feature known as One Touch CPU Cooler which can be used to decrease the temperature of CPU by closing unnecessary processes.

At the end I would like to say that by using these App2SD apps you can move your apps from internal phone memory to SD Card and free up considerable amount of space on your phone’s internal memory. If you have any queries regarding them then you can ask me by leaving a comment below.