Internet as we all know is the network of networks. In other words it is the interconnection of all the networks over the world combined together which is known by the name Internet. You can find anything on Internet, whether it is information, people, images or videos. Not only on Computer but now internet can found on mobiles, tablets, PDA and other devices. 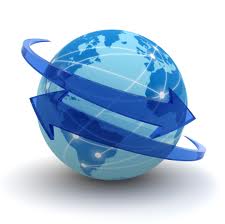 In the past we used to have Internet with very slow speeds that require a dial-up modem and telephone line to get connected to the internet. But now things have changed with the evolution of Broadband internet which is approximately more than hundred times faster than the dial-up connection. Broadband Speed Internet does have variants depending upon the technology used and speed offered. A common Broadband connection generally has speed of more than 512 Kbps or 1 Mbps.

How Internet Speed is measured

Download and Upload Speed can be calculated by dividing your Internet Speed by 8.

Very often I see that many users confuse Internet Speed with their LAN Speed. Whenever they connect to the Internet and see this notification ‘Connected at 100 Mbps’ at the bottom of their screen and they assume that it is their Internet Speed. Here I want to make clear that LAN speed is not your real internet speed, it is only the maximum speed at which your LAN card can operate. The real internet speed of your connection is the one that is provided by your ISP (Internet Service Provider). Below I will tell you on how to check or measure the internet speed of your connection.

Download Speed – It is the speed at which files are downloaded to your computer from the internet. It is measured in Bytes per second. Files can be downloaded from the Internet by using browser or any ftp program.

Upload Speed – It is the speed at which files are uploaded by you on to the server or internet. It is also measured in Bytes per second. Uploading of files can be done by browser or any ftp utility.

Bandwidth – It is size of the total amount of files or data both downloaded and uploaded by you on the Internet. It can be in Megabytes or Gigabytes depending upon your internet usage. It must be noted that browsing websites on the internet is also calculated as download.

How to Test Internet Connection Speed