If you are looking for a new android smartphone then don’t look any further because Mi 3 has just been launched in India. Mi 3 is an android smart-phone from Xiaomi, a mobile internet company from china. Mi 3 is an awesome budget phone with some great features that even some high end expensive phones do not have. Mi 3 is one of the fastest phones because of its speedy 2.3 GHz Quad Core processor. 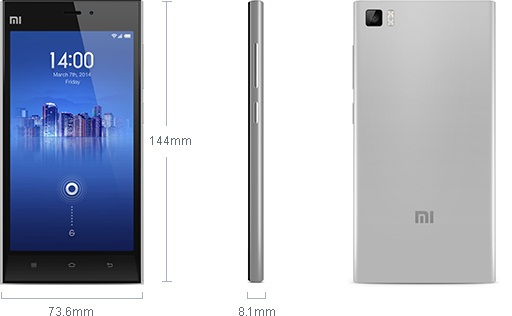 Mi 3 is now available on flipkart at a price of Rs. 13999/- which I must say is a steal. Register now with the link below to buy Mi 3 on sale day, which begins on July 22nd, 2014. The registration window is open from 15th July to 21st July Midnight, so hurry up as there is only limited stock available.

Here are the specifications and features of Mi 3 Android Smartphone.

It is powered by Quad-core 2.3 GHz Krait 400 Processor that is fast enough to run any games, applications or perform any task with ease. The Krait 400 architecture is said to be 40% more faster than the Snapdragon 600 processor.

The GPU in Mi 3 is Adreno 330 450 MHz that is quite powerful and you will have no problems in running or playing high end games.

The phone is very slim with only 8.1mm thickness and it weighs at 145 gram which is acceptable. Currently it is available in Metallic Gray Color and its body is made of aluminum-magnesium alloy frame, which is coated with three layers of thermal graphite.

Mi 3 sports a full HD 5-inch IPS LCD display (16:9) having resolution of 1080 x 1920 pixels (16M colors), having pixel density of 441 ppi. The screen is coated with anti-glare material so that you can read easily in daylight or sunlight. There is no scratch resistant Gorilla or Dragontrail glass present on the display which is a little bit downside for the phone.

It has got whopping 2GB LPDDR3 RAM that is very fast and consumes less power from the phone. The storage memory is 16 / 64 GB and there is no microSD card slot to upgrade storage memory.

A powerful 13 Mega Pixel Primary camera with Philips dual LED flash and a 2 MP front side camera for making video calls or taking selfie. Both these cameras can record videos in HD (1080) at 30 fps which is remarkable.

The OS on the phone is Android 4.3 Jelly Bean optimized with MIUI version 5

The device is powered by mammoth a non-removable Lithium-ion 3050 mAh battery which is enough to keep the device running for at least one day with sufficient usage.