Tweak UI is a free user interface customization utility for windows. It has a simple graphical user interface that lets you to change and tweak settings in Windows OS that otherwise would require editing the registry settings for Windows. It is very small application which is only under 500KB in size and the great thing about this application is that it is from Microsoft.

Tweak UI allows you to customize the user interface of the Windows operating system. Users with older and slower computers can turn off many aspects of the operating system’s eye candy features, such as fading menus, drop shadows, and cursor shadows. 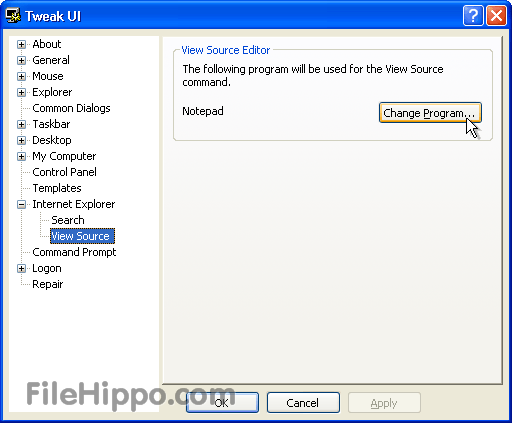 It also includes numerous features to customize the way the interface works, such as the taskbar and the desktop. The application also enables you to move the location of their Documents, Music and Pictures folders, as well as other system folders. It also includes various tools to repair elements of the operating system, such as icons, hot keys, the font folder, and file extension associations. It can be used to disable AutoPlay on one or more drives as well. Version 2.10 of Tweak UI requires Windows XP Service Pack 1 or Windows Server 2003 to run. Download Tweak UI from here.