I have written many articles regarding SMPS in this blog and have told you many times that in a SMPS the current on 12 Volt Rail is the most important thing when choosing a power supply for your PC. A SMPS or Power Supply can be categorized into two types on the basis of 12V Rail, which includes SMPS with Single 12V Rail and SMPS having Multiple (more than one) 12V Rails. Here in this article I will discuss about these two types power supplies and how they differ in terms of performance, reliability and safety. 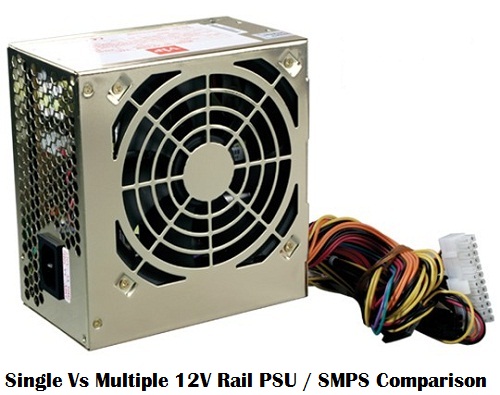 What are a Single and Multiple 12V Rail Power Supplies?

The Output of both single and multiple rail power supplies will be the same if total current add up in multiple 12 rail SMPS is the same as with the single 12V rail SMPS. This means if you have a single 12V Rail PSU having 40A on 12V rail and a dual rail PSU having 20A on each rail then the 12V Rail output of both these power supplies will be the same if the current on dual rail SMPS will add up to the current in Single 12V Rail SMPS i.e. 40A (20A + 20A).

Over current protection is a safety feature that prevents your power supply from exceeding the amount of current present on each rail. This can happen if the component or device requires more current than available on 12V Rail of SMPS and causes the SMPS to overload, which can result into crashing, burning of cables or explosion of your power supply. If OCP is present on the SMPS then the SMPS will shut down if the current on 12V rail exceeds it recommended rating.

Single 12V Rail SMPS have high amount of current on 12V Rail and they may or may not have OCP present on them, and if it is present then also their OCP is set to very high level, which can be very dangerous for your components if any overloading of current in the power supply occurs. But in multiple Rail SMPS each 12V rail has it individual OCP that is set up to a certain extent i.e. 20A or 24A. Multiple Rail SMPS are more secure & offers better safety than the single 12V rail SMPS because if current load on any rail exceeds the normal level then the OCP will kick in and shuts down the SMPS preventing any damage to the SMPS or other hardware components.

Which Power Supply is Better – With Single or Multiple 12V Rails?

Well the choice between single and multiple 12V power supplies is always been a topic of debate and it also comes down to personal preference of the users. For safety wise multiple rail power supplies are better but if you have a heavy or top-end graphics card or components that requires a good amount of current from 12V Rail then you should stick with single 12V rail SMPS having huge amount.